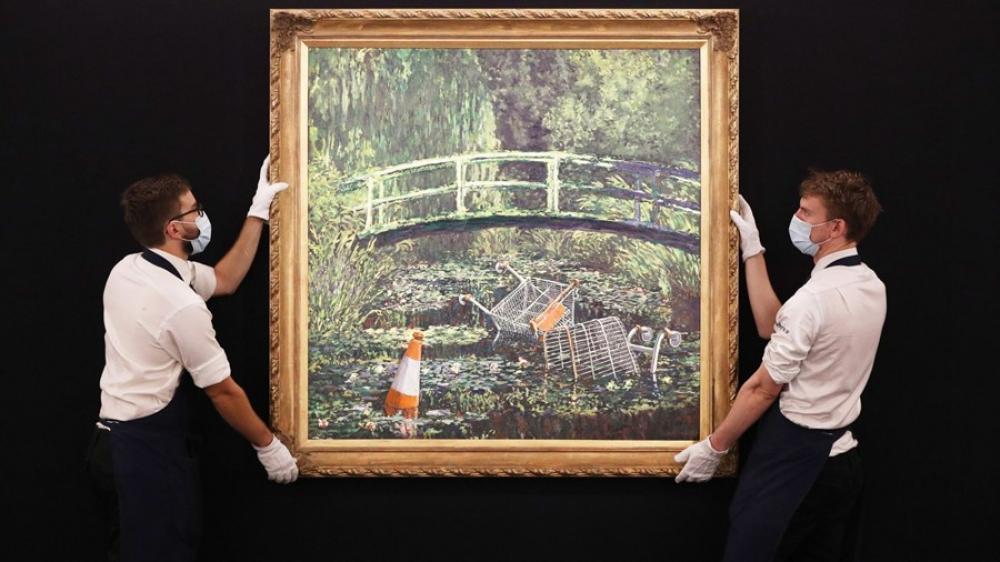 Show Me The Monet By Banksy's

Banksy’s “Show Me The Monet” interpretation of Claude Monet’s water lily painting has certainly lived up to its name by selling for more than £7.5m at an auction earlier this week.

The painting was created in 2005 and adds abandoned shopping trolleys and a traffic cone to the impressionist painter’s famous garden scene. It was sold at a Sotheby’s event in London on Wednesday (October 21) following a tense nine-minute bidding war between five collectors. Despite having an estimated worth of £3.5-5 million, it fetched for a staggering £7,551,600.

The painting is the second most expensive Banksy sold at auction, after his painting “Devolved Parliament” sold for nearly £10 million last year.

“Show Me The Monet” is part of a series titled Crude Oil, which “remixes” canonical works. Also included is a rendition of Vincent van Gogh’s “Sunflowers” dead in their vase, Edward Hopper’s “Nighthawks” circa an angry man in Union Jack boxer shorts, and Andy Warhol’s Marilyn Monroe replaced with Kate Moss.

“In one of his most important paintings, Banksy has taken Monet’s iconic depiction of the Japanese bridge in the Impressionist master’s famous garden at Giverny and transformed it into a modern-day fly-tipping spot,” said Alex Branczik, Sotheby’s European head of contemporary art.

“More canal than idyllic lily pond, Banksy litters Monet’s composition with discarded shopping trollies and a fluorescent orange traffic cone,” he added. “Ever prescient as a voice of protest and social dissent, here Banksy shines a light on society’s disregard for the environment in favour of the wasteful excesses of consumerism.”

A slightly less successful attempt at selling a Banksy comes from a man who tried to flog his stolen artwork on Antiques Roadshow – read about the rogue attempt here.